Billygoat! The general plan was to do this with Rhonda at a relaxed pace. I thought maybe we could do it in 5:30, and I was motivated by the knowledge that there was no 3:30 time limit in 1979. We thought we might go Sunday, but Rhonda had turned an ankle Saturday and wanted to see how it would hold up. It was fine. Then we thought Monday, but the forecast was rain. She had an appointment Tuesday, so today turned out to be the day. Had to be back by 3 or so for class, so we started fairly early.

First two controls relatively hard, lots of climb, and we weren’t going very fast. Rhonda was not really enjoying it, and at the rate we were going, we weren’t going to make it. 3 and 4 were fine, but she had had enough and just went for her own walk. Back through the parking lot and along the trails, cutting the corner to cross the streams to the last one. Across and under the cliff to 6. Along the edge of the hill above the pond, but never saw the trail. A little uncertain about the reentrants, but kept going and hit 7 right on. Straight uphill to 8, another spike, then headed north to find a reasonable way down the cliffs, found a little switchback trail and crossed the stream right by the trail up to the clearing and across on the trail to 9. At this point it was getting pretty hot. I had a camelback, but it wasn’t working, and I didn’t have a hat. So I sat down and took off the camelback to try to figure it out. Eventually just pulled the nozzle off and could drink like that, then put it back on to travel. Sun was getting to be a problem and concerned about burning my scalp.

Some hikers passed me while I was sitting by the trail fiddling with the camelback, but then took a right at the T so I didn’t pass them back, just generally on compass up to the flag. Then across the large knoll to pick up the trail, left for a bit then R and up the hill before contouring across. Gratified to hit the control right on, but getting increasingly hot and uncomfortable. Eventually thought to tie the corners of my bandana and make a cap. Pretty silly looking, but extremely effective and cooling. Up the hill to the large rock feature before the trail, right a bit for an easier climb, and right to the control at 11. A bit of scrambling to get down to the trail, then left to the ridge trail and immediate right taking that trail until the sharp bends Passed a few folks who were at a lookout near the little pond halfway along the trail. On compass downhill, trying to keep the rock features straight, and came right to the flag on the boulder at 12. Somewhere around here my phone battery died. Took it out to examine a text I had received and it was at 2%, and dead shortly
after. 13 was the most pleasant leg of the race. More or less straight, along the right side of the marsh, up to the ridge line by the boulder and the knoll with the cliff, across the rocky spur, middle of the knoll with the twin reentrants facing S and N, and could see the flag from there, straight in front of me.

Kept more or less to the cliffs along the left side of the route to 14, climbed a bit across, until I could see the reentrant that drained from the marshes. Up and looked at the marsh for a while, thinking the flag would be on the edge, but then checked the clue - knoll, so easy enough. On compass, eventually picking up the road for a while, then crossed over to pick up the trail along the stream. Started climbing when I saw the big prominent cliff that was before and a few lines above the cliff at 15, so no difficulty.

Then the plan for 16 was to head on contour and gently downhill to meet up with the start of the leg to 1, and follow the same path up the reentrant. Got a little distracted when Niels came by and gave a cheery greeting. He was traveling pretty fast! Anyway, suddenly insecure I headed out to the road, so a little extra loop and climb compared to what I had planned. Also a little insecure just before the control, but climbed up and figured it out. Saw a phantom control a knoll early, but it was just a leaf. Then leaving 16 intending to follow the stream to 4 and thence trail and back, bit somehow got going a wrong way and didn’t find the stream. Endeavored to just go S to try to hit the road, and kept passing E-W trails, and just taking forever. Following compass S, but the terrain pushing me E. Eventually bumped int the marsh, and couldn’t really understand how I got there. My watch had been whining about low battery for about half an hour, and I was getting anxious about it dying and taking my track and splits with it. Anyway, eventually hit the road and the parking. Rhonda was there, gave me her watch for a little security and I dropped off the camelback. Heading back out I ran into Niels, who had just finished and had an excited story about a bear, but I never saw the bear. Up hill on trail until the trail bent to follow the stream more sharply uphill. Contoured across and hit it right on. Then out to the trail and down a spur to cross the marsh pretty far right of the pond. Seemed like it took forever to get to the actual pond. By the time I got to the little island I was pretty cooked, sore back, hamstrings and a little Achilles tweak. Tried to scramble across on the sticks, but slipped a foot into the mud anyway. Took a lot of concentration to get myself back on the last leg. Back to the car and more or less straight home.

With Rhonda at Lake McDonough, a bit faster and further than I have been going the last few weeks, so maybe things are looking up.

I washed the back of the Garmin, which seems to have fixed its heart rate problem.
C • Washing HR 2

It was snowing pretty vigorously yesterday around 7 pm or so. The deck and parts of the yard covered this morning.
9 AM

At people's state forest. Admired this very attractive new picnic table they installed near a lookout along the park road. Substantial enough that you would want to assemble it where you were sure you wanted it to stay. 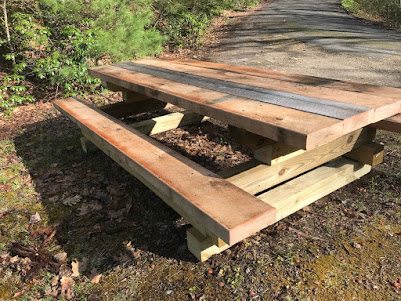 Garmin HR not behaving today. Usually it does just fine.

Alas, shutting down both rowing and laurel wrangling for a while. My chronically weak L forearm and hand are both complaining and I need to calm them down before it gets to my elbow. Once it gets into the elbow it takes a really long time to get better. At this point, the worst of it is just distal of the elbow, but the whole tendon is inflamed from the wrist on up.
12 PM

Luther was back yesterday evening. Took this picture through the window from the safety of my office. He is certainly a beefy fellow. Has a pronounced limp of the L rear paw, but it does not seem to have interfered with his ability to get proper nutrition. So what was he eating in the yard? Last fall's acorns and this spring's dandelions. 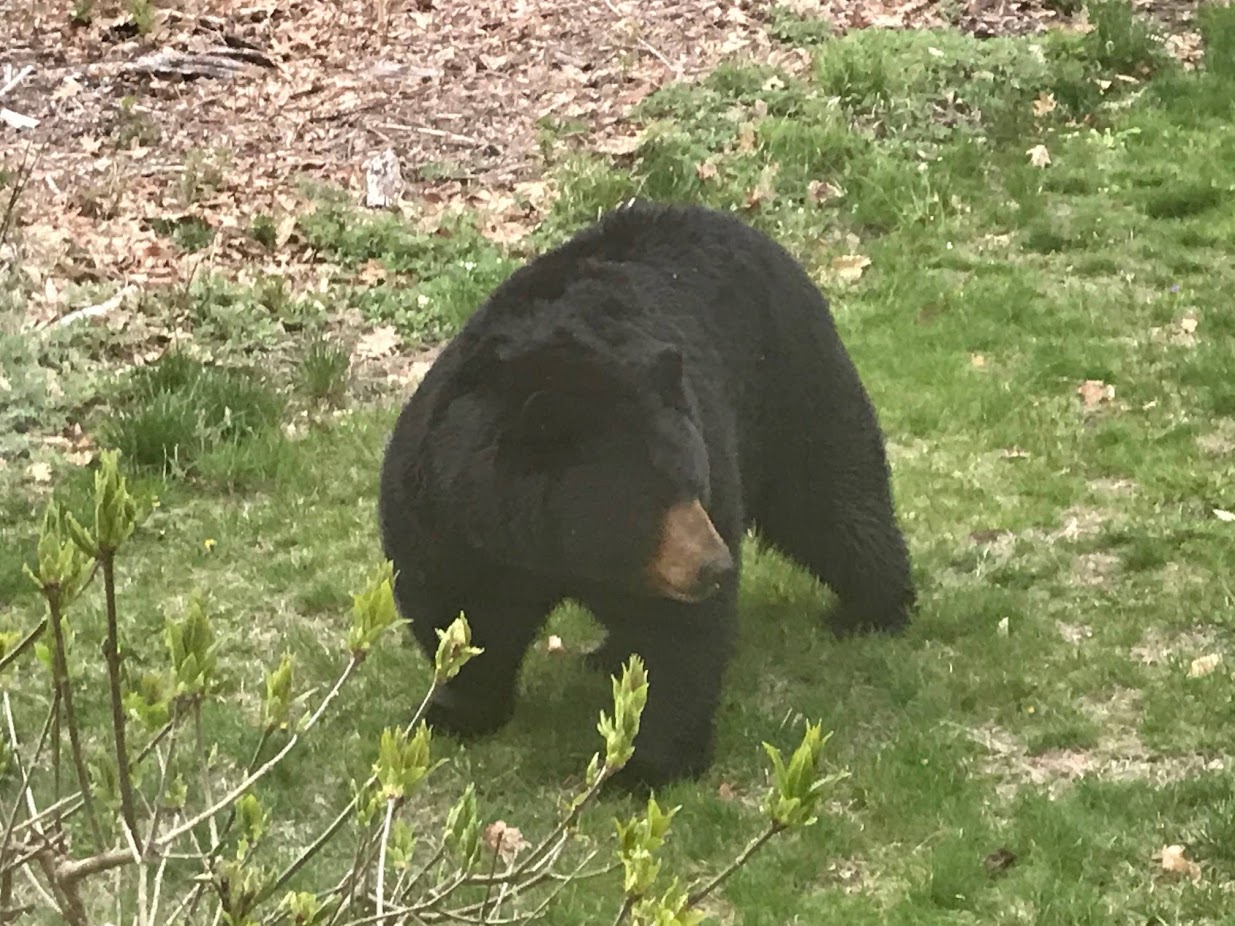 From LeGeyt road through MDC property that was logged last year. Nice and open, and the road in was greatly improved. A few muddy spots, but mostly a nice wide trail. Saw a yearling bear cub, and shortly after his very substantial mom, who stared us down for a bit before ambling off. A lot of them around these days.