Brown Lizard course in Acton at Nagog Hill, thanks to the Campbell Clan.

I went alone since the day was fairly unpleasant (40s and raining). My orienteering was so-so but I did accomplish my mission of getting out and moving my legs for a bit.
C • Brown Lizard and Yellow Gecko 4

Out again for some node hunting in mid-Cambridge. I drew a map this time and it was way easier to keep track of what I was doing. 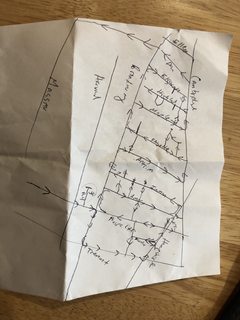 I again finished the run at Life Alive to pick up an Emperor Bowl, partly to support them and mostly because I ate leftover birthday cake for lunch and needed some brown rice and kale to cancel it out. It wasn't quite done when I arrived so I chatted with them for a bit (from an appropriate distance). Turns out the staff that hasn't been let go (they only have 1/4 of the pre-pandemic order volume) is mostly concerned about staying entertained during the many slow hours than anything else. So, I will keep ordering and tipping and hope that the place survives.
C • Did you.... 7

I got myself out the door for a run only 5 hours after putting on running clothes!

Went node hunting in The Port & Mid-Cambridge. On the way up there I discovered that our closest corner store, recently under new ownership and improved 5000%, is closed until April 1st. That's a bummer, it's a nice way to avoid the bigger supermarkets when you just need one or two things. I hope that shutting for a couple of weeks doesn't hurt them too much.

Hit a bunch of streets I needed, though I should really draw a route on paper because I just can't remember everything and using a phone is annoying.

Towards the end of the run I ordered a lunch bowl to go from my favorite lunch spot and ended my run there in order to eat it on my walk home. Back in the last century, before the pandemic, when I worked in an office, I would get this bowl 2-3x per week. There's absolutely zero reason for me to be ordering food instead of making something at home right now, but I do feel it's important to support these local businesses and their employees while they can't do a lot of their normal business. (Restaurants in MA have not been allowed to have dine-in for a week now.)


Also I can't find my watch charger and it's almost out of battery so I guess I may not run ever again.
C • Eating Out -- No Guilt! 15

While doing this I knocked over (and then rebuilt) the "golden dome" magnatile structure that Lukas and I had build in the morning and also found a pair of scissors almost poking out from under the sofa.