Used both UsynligO and O-Range in addition to finding streamers. O-Range provided a superior experience.

I wasn’t sure what to expect from the woods this time of year and the way to the first control didn’t really excite me. And then I just couldn’t make sense of things around there, even I after found the streamer. The woods were generally pretty good after that, my orienteering was only mediocre. At least after the first two I always saw the streamer/feature before my gadgets alerted me, so that was something.

Since I was in the neighborhood I decided to go over to Mt Watatic, too. Hiked up a reasonably direct route, too steep for very much running, then ran down a gentler way with a visit to the NH state line. Strangely there was no state liquor store to be found there.

Found two geocaches along the way and saw a lot of people out on the trails. Popular place, even on a day with low chance for good views.
C • reasonably direct 6

Headed out to the Blue Hills for what counts as Friday night fun these days. Parked at the eastern terminus of the Skyline Trail with the plan for an out-and-back.

I didn't get very out because I stopped to take pictures, working on my Snappy Happy badge. Unfortunately, I neglected to change my original plan to account for the photography and turned back after about 30 minutes of running time, rather than 30 minutes of clock time. It wasn't long before I realized that the sun was already setting, so I took the flat route around the final two hills in an attempt to make it back to the car before total darkness. I made it but it was getting hard to see the trail.

Speaking of the final/first two hills, I don't find the super steep scrambly bits very much fun. I don't mind being reduced to a hike on the ups but it's annoying not to be able to run down. The whole point of running up is that you can run down afterwards!

One FDF, this time trying to eat the web between my left thumb and pointer. It was most likely the same one that I saw the last time—it looked the same—supporting my theory that there is only one FDF in the Blue Hills. 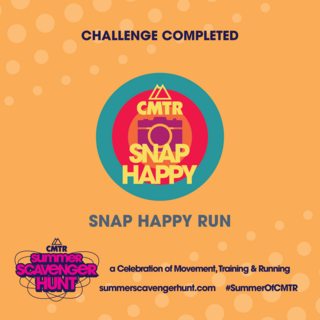 "Enjoyed" the final day (for now) of oppressive swamp air by doing a morning workout along the Charles.

Managed to run these pretty well (that is, increasing speed/effort on the shorter ones, and keeping up the paces throughout each of the same length) despite the miserable atmospheric conditions.

Had a lot of nights with low quantity and poor quality sleep. AND the Red Sox are really bad this year.